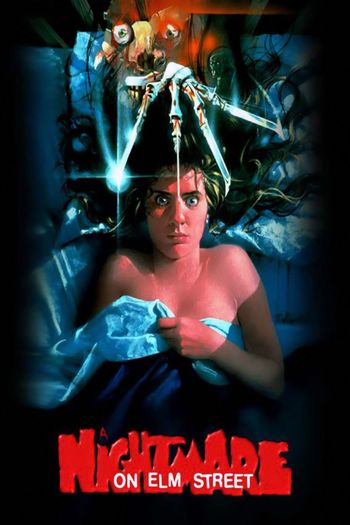 In the early 1980’s, a psychopath named Fred Krueger – known as the Springwood Slasher – murdered several children with a glove outfitted with straight razor blades attached to the fingers. When a foolish decision by a judge sets Krueger free, an angry mob of parents, whose children he terrorized and murdered, burn Kruger alive in the boiler room where he worked. Years after his death, the living children of the parents responsible for Krueger’s death (including Nancy Thompson, daughter of the police officer who arrested Krueger) experience terrifying nightmares involving a burned man wearing a glove with razor blades on the fingers. The ghost of Fred Krueger haunts their dreams, and when Nancy’s best friend Tina dies violently in her sleep during a dream confrontation with Krueger, Nancy realizes she must find a way to stop the evil psychopath’s reign of terror – or never sleep again.

Fred Kruger is the substance of nightmares. He always appears strangely dressed and has knives on the fingers of his right hand. A group of four teenagers all begin to have the same strange dreams about Fred before one of them is gruesomely murdered in her sleep. The survivors soon realize that if Fred kills them in their sleep, then they will die in real life too. Thus begins an ordeal of wakefulness as they try to find some way to stop Fred.

Nancy and her friends suffer violent nightmares which all feature one common element, a disfigured serial killer with a glove made of razors on his right hand. When one of the group is murdered while asleep, Nancy realizes that she must stay awake and try to uncover the truth behind this phantasmic killer Fred Krueger.